Salzburg is accused of anti-semitism in Weill’s Threepenny Opera

The influential critic Dr Robert Braunmüller has laid into the Salzburg Festival over its new production of the Brecht-Weill Threepeny Opera, in which Peachum is made to look and act like Fagin, Charles Dickens’s anti-semitic caricature in Oliver Twist.

The production is by Julian Crouch and Sven-Eric Bechtolf. Robert accuses them of deliberately using anti-semitic images to arouse controversy.

Read his articles here and here in the Salzburger Abendzeitung.

The first-night visuals are certainly disturbing. 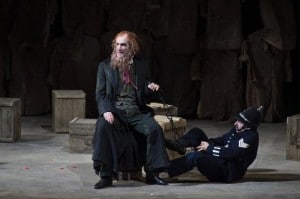 Here is my own take on the Fagin debate.