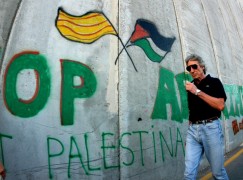 Roger Waters: I don’t hate Israel. My grandchildren are Jewish.

The ex-Pink Floyd member has given an extended interview to the Israeli colunist Gideon Levy, explaining his activism in the BDS movement, an involvement that had led to accusations of anti-semitism against him.

It is a bit of a one-way conversation. Waters takes a fixed position, drawing much of his information from disaffected Israelis, among them the daughter of a former major-general. You need to read the full, often fascinating interview here. The nub of his case is this:

And here we get to the core of the issue, because in Israel many people ask: Why Israel, when there are so many other countries that do the same?

‘Well, if you’re determined to stand on the side of truth, justice, liberty, human rights, individual freedoms, political equality, and freedom to worship whatever you want, all of that – from time to time, situations crop up that demand your attention more than other situations, because they’re blatant and they’ve been going on for a very long time. People also complain about anybody making comparisons between apartheid South Africa and Israel. But particularly in the occupied territories – but also in Israel, in my view – the comparisons are valid.

“In the 1970s and ’80s, there was no question – we all focused on South Africa because it was the obvious place to focus. It was a place where it looked like all of us who took part in the Anti-Apartheid Movement, as it was called then, might have an effect, and might cause changes in policy in that small part of the world. Israel is that bit of the world now. Whether Israelis or anyone else like it or not, it just is.’

What would you say to an Israeli who thinks outside intervention is anti-democratic, who says, “We should get to decide our future for ourselves”?

‘What would I tell such a person? I would say to them, ‘If you actually had a democracy within the State of Israel – if there was such a thing within the Green Line, within the ’67 borders, within the whatever – if you reinstate all those houses you’ve demolished in East Jerusalem, and let the people who were living there before you threw them out come back; and if it was a democracy, and if you weren’t occupying all this other land, and so on and so forth, and if you weren’t trying to reduce the numbers of the other indigenous people who are not Jewish people in the area – if all those things pertained, well, I would absolutely applaud you and your state.’

‘But that is not happening. And I suppose you could make the case for it being a Jewish state – I personally think it’s hugely dangerous to give any religion the power to control an entire country and all the people in it.’