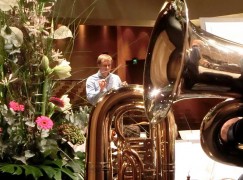 Orchestra gets developers to pay for new hall

The Norwegians know the value of a Euro (that’s why they never joined the EU).

Instead, the Oslo Phil has got together with property developers to build itself a hall. This way, everyone makes money and a good acoustic is guaranteed. Press release below.

The Oslo Philharmonic, together with Norwegian property developers Anders Buchardt and Petter Stordalen, has drawn up plans for the building of a new concert hall in Oslo. Situated centrally in the city on the waterfront at Filipstad, the building will be financed, built and run by the property developers Buchardt and Stordalen, with the Oslo Philharmonic as the principal tenant. The project will be financed in conjunction with the building of a large congress hotel on the neighbouring property.

“This is the first time in our almost 100-year history that we have the chance to build a hall specifically designed for the orchestra”, says Ingrid Røynesdal, CEO of the Oslo Philharmonic.

“The Oslo Philharmonic has a strong audience base and significant international standing. A new hall is the most important factor now for our continued development. It will be a significant addition to the thriving cultural life of Oslo, boosting the city’s already strong international musical reputation”, says Røynesdal.

The Oslo Philharmonic Orchestra was not part of the planning and building processes of the current Oslo Concert Hall. This resulted in a hall that from the outset was far from ideal for the requirements of a modern orchestra and its audiences. Since the 1980s, repeated attempts have been made to put the case for a new hall. Optimal acoustics, audience facilities and stage facilities will be prioritised this time around, creating a world class concert venue available to Oslo’s thriving acoustic music scene.

“We have a unique window of opportunity here to build a concert hall for the future in the very heart of the city”, says Røynesdal. “We hope people will see what a fantastic chance this is. For the project to become a reality, our politicians need to grant the final planning permission for the redevelopment of the Filipstad area.”

“The concert hall in conjunction with the congress hotel, will generate activity in the Filipstad area both day and night. The aim is to create an attractive, exciting public arena accessible for everyone. This is a project where everyone’s a winner. It will be a huge boost to the city’s cultural life, to the cityscape of Oslo, and will be a space for locals and tourists to use and enjoy”, says Anders Buchardt.

“We have already proved that such a collaboration can be successful. In Malmö in Sweden, visionary politicians, arts leaders and the business community have joined forces to create a magnificent combined cultural centre and congress hotel. The result is a new focal point for the city. We now have the chance to do the same for Oslo”, says Petter A. Stordalen.

If the project is given the green light, design proposals will be invited from international architects. The actual building process could be completed within two and a half years from the laying of the first foundations.

« The Sibelius question: Oramo, or Vänskä?

How long can headless ENO survive? »