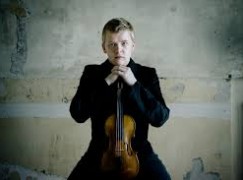 The Finnish violinist Pekka Kuusisto is to be artistic director of ACO Collective, an offshoot of the Australian Chamber Orchestra.

Finnish violinist, Pekka Kuusisto, has been appointed as Artistic Director of ACO Collective (formerly known as ACO2). The appointment starts in 2016 and runs for three years, and a main-stage tour in February 2016 will form his first project.

Kuusisto will work closely with the Australian Chamber Orchestra’s Artistic Director, Richard Tognetti, who said the following about the announcement: “Pekka has a calling to turn things on their head. A musical insight that is as disturbing as it is compelling. He’s a musician for the new world and, therefore, his appointment to the newly branded ACO Collective couldn’t be bettered. I look forward to working with Pekka and eagerly anticipate how he will evolve new forms from ancient traditions. This is a big appointment for the ACO, and for the future of music in Australia, and we confidently entrust Pekka with these responsibilities.”

ACO Collective combines musicians of the Australian Chamber Orchestra with Australia’s most talented young professional musicians at the outset of their careers, selected from the ACO’s Emerging Artists’ Program, to create a combined ensemble with a fresh, energetic performance style. Kuusisto already has a long history with the organisation – his debut tour with the ACO was in 2001 and he has performed regularly with both the ACO and the former ACO2 ever since.

Death of a reformed modernist »