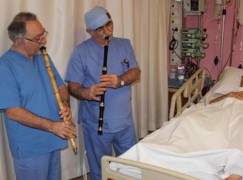 Nurses to surgeons: Cut the music

A survey by the Journal of Advanced Nursing says surgeons should not be allowed the choose the music in theatre. There should be a decision by the whole team whether to play music or not, and which to play.

The survey found that in some instances team members could not hear what the surgeons were calling for during an operation, and that having to repeat instructions led to delays and possible danger.

The survey flies in the face of established wisdom, which is that music can assist calm and concentration in theatre.

Apparently, the first use of music in an operating theatre dates back to 1914. Anyone known where, who played, and what music?