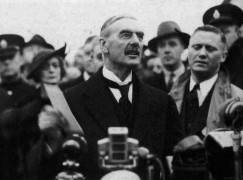 In a report on a new piece being written around political catch-phrases, the BBC’s Today programme discovered a concert grand that had been given to Neville Chamberlain after he returned from Munich on September 30, 1938, waving the piece of paper that sold the Czechs to Hitler. 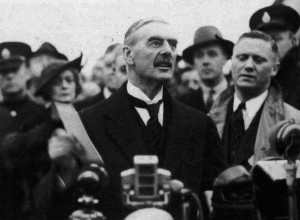 The gift came from the manufacturer Julius Blüthner ‘on behalf of the German people’, in gratitude for the British PM’s efforts to avert war.

The gift appears to have been made public at the time since there are (we see) a number of letters in the Chamberlain correspondence files at the University of Birmingham that question his propriety in accepting it. But the rules were more relaxed in those days and the piano remains, according to the BBC, in the possession of Chamberlain’s granddaughter.

There was nothing corrupt about the gift, which appears to have been personal and heartfelt. Blüthner’s busiess had receced under Hitler while his arch-rival Carl Bechstein, a a Nazi supporter from the early 1920s, prospered. Blüthner’s hope for peace may have contained a forlorn wish that the Munich Agreement had been a setback for Hitler.