The artist Mary Bauermeister, who is 80, has published an extraordinary autobiography in which she lays bare her life with the composer Karlheinz Stockhausen … and his wife and children.

The book,  Ich hänge im Triolengitter is published by Bertelsmann (in German). This Die Zeit article, also in German, gives a taste of the unorthodox Stockhausen ménage. 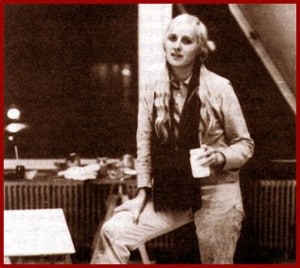