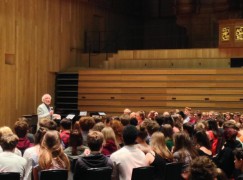 Mahler’s Ninth is not child’s play

Going to hear the National Youth Orchestra work on Mahler’s ninth symphony for this Saturday’s BBC Prom, I was more than a little anxious at how a group of 170 teenagers would address the composer’s struggle with death, let alone the technical complexities of that whispering finale.

I need not have feared.

The young musicians, aged 13 to 19, played with as much seriousness and application as any of the world’s great orchestras I have seen in rehearsal. The concentration on Mark Elder’s comments was absolute. The final pages of the symphony sounded like a feather on the breath of God.

Mahler himself could not have imagined it more sensitively realised.

The same seriousness and concentration was in evidence when I talked to the group about meaning in Mahler and what his music has to say about the darkest moments in our lives. I have seldom stood before a smarter, hungrier, funnier, more responsive audience – the ideal audience that lets you know where you’re going wrong before you even go there. Every question I was asked was testing and to the point. Every interaction was thought-provoking. 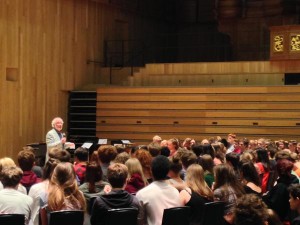 Members of the National Youth Orchestra come from all kinds of backgrounds and every part of the country. Levels of general education were varied, so far I could tell. Only one had read Kafka, none knew their way around a paintbox. But almost all had played something by Shostakovich.

The young musicians meet three times a year for an immersive experience in a musical masterpiece. To see them explore and embrace the elusive ambiguities of the late-life preoccupations of Mahler’s Ninth was a tremendous affirmation of the work’s many-layered meanings. It was a supreme pleasure for this hard-bitten Mahler searcher.

More than a pleasure: it was a privilege.

Glyndebourne is back on crutches »