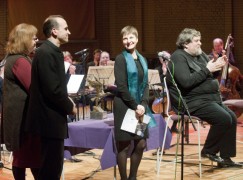 Birmingham’s Contemporary Music Group, established in the Simon Rattle era, has been a beacon for composer-public engagement in the UK, with audience members chipping in to pay for most of its premieres and CBSO musicians engaging eagerly with new works.

Now, a pair of founding members who have run the ensemble for 15 years have decided to step down. Big round of applause.

Stephen Newbould, Artistic Director of Birmingham Contemporary Music Group and Jackie Newbould, the ensemble’s Executive Producer, have decided to stand down from their roles at the end of BCMG’s 2015/16 season.

Stephen helped launch BCMG in 1987 and became the ensemble’s Artistic Director in 2001. Jackie was also a founding member of the BCMG team, and has overseen BCMG productions and management from the beginning as its first Administrator, then as General Manager and most recently, as Executive Producer.

“By summer 2016, Jackie and I will have led the BCMG team for 15 years, having been part of this exhilarating enterprise for over 25, and the time feels right to pass on our respective batons. We told the Board of our decision last summer. It has been a privilege and joy working with BCMG’s passionate, committed musicians and with so many wonderful composers and artists, bringing new music to our ever-enquiring audiences. Though it will be a huge wrench to leave our remarkable colleagues, as we move on to our next challenge we will be excited to watch the future development of a company we love and admire.”

“As the years have raced by, I have become joyfully aware that this must be one of the best arts jobs in the country and I am lucky not only to have had it, but to have had so much fun and so many invigorating experiences in doing it. It’s an immense privilege to have been part of BCMG, working with such treasured performing artists, composers, management, board and audiences since the Group’s beginnings. I am looking forward to our final season with relish and celebration, and then to the leap onto the next mountain for another view.”

Death of a Russian conductor »