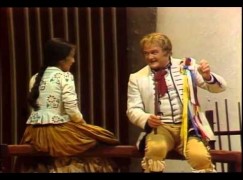 Jon Vickers: ‘The genius of the performer dies with him, nothing can keep it alive’

We’ve been sent by its official transcriber what may be the most candid interview ever given by the heroic tenor.

In it, he discusses seriousness of purpose (which should not be mistaken for lack of humour), the importance of principle and the tolls of mortality.

Bruce Duffie, who conducted the interview in November 1981, clearly formed an intiutive bond with the tenor.

After having seen and admired his performances and recordings for many years, it was in November of 1981 that I made contact with Jon Vickers, and he agreed to meet with me at the Civic Opera House in Chicago.  More of those details are in the introduction below.  A day or so after the chat, he called me to correct and further amplify a detail he had related.  I later sent him a copy of the finished interview and some months afterward, I received another call from him – not from his agent nor a secretary, but from the man himself – just to tell me how very pleased he was with the way it came out and with how well I’d been able to present his thoughts and opinions.

Breaking: Classical label chief is beaten up in Moscow »