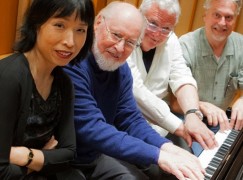 John Williams on his ideal orchestra

The composer, starting recording sessions for The Force Awakens, talks to his union website about the Los Angeles musicians who are playing on his next soundtrack.

‘This group is made up of a pool of freelancers in Southern California. I’ve worked with them for decades now on a variety of films, and I am friends with most of them. They consistently come together to form a fabulous orchestra, and I’m always happy and proud to be reunited with them for these projects.’

After six previous film soundtracks being recorded in the UK with the London Symphony Orchestra, The Force Awakens marks the first Star Wars soundtrack to be recorded on American shores, utilizing musicians from AFM Local 47. ‘With this new film, the schedule has evolved to the point that I’ll need to be working with the orchestra continuously for several months, and that’s obviously easier for me to do here in Los Angeles, than it would be in London.’