Greta Bradman, granddaughter of the greatest batsman that ever took guard, is a professional concert singer.

After studies in Wales with Dennis O’Neill, she has been working with Richard Bonynge on a debut album with the English Chamber Orchestra. Bonynge says ‘she should be singing at Covent Gardn.’

Her recording is now top of Australia’s core-classical charts and Greta is off on tour with  Zubin Mehta and the Australian World Orchestra.

It’s rare for the physical world of professional sport to meet the spiritual realm of art, but when it does the confluence can be fascinating. 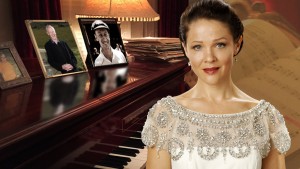 « The night SanFran waited up for Domingo