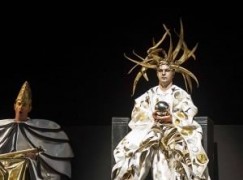 Disaster: Tenor breaks his back in Puccini fall

We’re used to sopranos missing the mattress in Tosca, but this sounds like incompetence verging on criminal negligence.

Marco Voleri, playing the emperor, was sitting on the throne in Turandot at the Puccini Festival in Torre del Lago when part of the stage collapsed. He fell a distance of six feet, fracturing his spine. Rushed to hospital, he will undergo surgery in the coming days.

Marco said: ‘The collapse was so sudden that there was nothing I could do to avoid falling; I felt the ground disappearing from under my feet.’

Wigmore Hall banned my watch because ‘the tick is too loud’ »