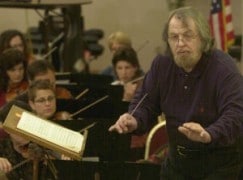 Death of a maestro

George Cleve, who conducted all the major US orchestras and was music director in San Jose until the symphony went bust, has died at the age of 79.

He told the local newspaper: “Orchestras are dying left and right, and I don’t really know what the end is going to be. I’m a believer that people will ultimately realize that they need the arts. It’s not just a luxury at all. I think it’s an absolute spiritual necessity to have the arts, and music in particular, because it’s such a consoling, nurturing, international way of communicating.’

« Christian Thielemann: ‘I don’t do it for the money’