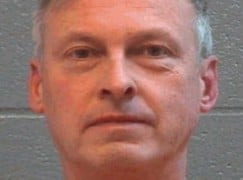 From the Augusta Chronicle:

‘Randy Houston Mercer pleaded in U.S. District Court to production of child pornography, a crime punishable by 15 to 30 years in prison. According to court documents, Mercer produced child pornography between July 2014 and January, and had sexual relations with underage teens without revealing he was an HIV patient.’

He is being held without bond, described as ‘owner of Peach Augusta, a women’s clothing boutique in Surrey Center, and a professional make-up artist.’

A man of the same name is the make-up designer of three major Broadway musicals.

There is a further link on Broadway World.