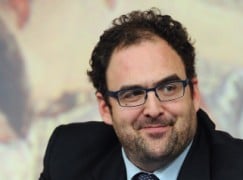 A week ago we reported that orchestras across Italy had been told by the Ministry of Culture that their subsidy was being sharply cut. Media in Germany, Austria and the US have picked up the story with varying degrees of alarm.

Today, the official who signed the letter in the dead of August, Salvatore Nastasi, has been promoted to deputy head of the prime minister’s office.

Looks like a smart career move…. or an Italian job.

As for the orchestras, who knows?

« The pro football team that warms up to opera arias