Breaking: Classical label chief is beaten up in Moscow

Andrey Krichevskiy, head of the Melodiya record label, has been severely beaten up near his office. His condition is described as serious and he has been transferred to the central clinical hospital.

Andrey has been the subject of threats since he opposed a government reform of authors’ rights which threatens to enrich certain oligarchs and leave composers and performers without revenue.

Andrey said his attackers repeatedly threatened to beat him again if he persisted in opposing the measure. 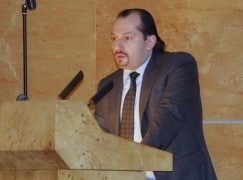