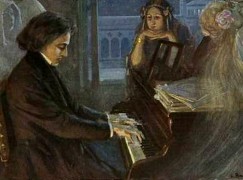 The yellow label has taken a leap of faith in this October’s Chopin competition, committing to record the winner whoever he or she may be. It’s a boost for the competition, which has been overshadowed in recent years by the revitalised Tchaikovsky contest in Russia.

Deutsche Grammophon and the Fryderyk Chopin Institute launch a bold strategic partnership to connect global audiences with Chopin’s music and the best of the International Chopin Piano Competition. An album of the winner’s performances at the 2015 International Chopin Piano Competition to be released on 6 November Deutsche Grammophon (DG) believes that the world’s next great classical pianist could be discovered in October in Warsaw. It has committed to releasing an album of his or her recital performances on 6 November, just two weeks after the recording of those piano recitals. That the repertoire will be virtuoso Chopin is known, because the artist will have been judged winner of the Fryderyk Chopin Institute’s prestigious International Chopin Piano Competition, following a four-stage series of recitals which begins on 3 October. The unique arrangement to release a recording from an as yet unidentified artist is part of a new creative partnership between DG and the Fryderyk Chopin Institute.

The partnership also encompasses a high-profile international PR and marketing campaign for the 2015 winner’s album. This initiative marks a strategic collaboration between the Chopin Institute, organiser of one of the world’s most prestigious classical music competitions, and DG, the leading label for classical music, aimed at promoting the Polish composer and highly talented interpreters of his works. Announced at a press conference in Warsaw on Wednesday 12 August, the partnership will be officially launched in October at the 17th International Chopin Piano Competition.

Founded in 1927, the Chopin Competition has been held every five years since 1955. It stands for the highest values in musicianship and artistry and is widely acknowledged to be the foremost competition for classical pianists, with an uncontested reputation for discovering the world’s most talented artists. The list of past winners reads like a Who’s Who of piano legends, including DG artists Maurizio Pollini, Martha Argerich, Krystian Zimerman, Yundi Li and Rafał Blechacz. Runners-up have included Vladimir Ashkenazy and Mitsuko Uchida, both signed to DG’s sister label Decca.

“This is a collaboration between two partners who are already closely associated,” notes Costa Pilavachi, Universal Music Group International’s Senior Vice President of Classical A&R. “No other contest has discovered so many top artists with such consistency over so many years and a substantial number of these world-renowned pianists have chosen to entrust their recording careers to DG. Every five years, music lovers around the world await the judgement of the Chopin Competition jury with keen anticipation and one of our goals is to present this year’s prize-winning pianist to the largest possible global audience as soon as possible after the event.”

Artur Szklener of the Chopin Institute sees the arrangement with DG as a major development for the Warsaw-based organisation and its mission to promote Poland’s music heritage. “Chopin’s art speaks to the highest aspirations of human creativity. Our aim is to share his legacy with both new audiences and existing music-lovers by presenting them with fresh, insightful interpretations of his work. Through this partnership Chopin’s timeless music is certain to attract even greater attention, and this first release will provide a wonderful artistic and professional showcase for the eventual winner of the 2015 competition.”

This year’s Chopin Competition opens on 1 October with a gala concert featuring Martha Argerich. Of the over 450 performers aged 16 to 30, from 45 countries, who originally entered the Competition, 160 were selected by the Qualifying Commission to contest the Preliminary Round in Warsaw in April. The judges then advanced a total of 84 pianists to the three final recital stages which will run from 3 to 16 October. China and Poland have the largest number of contestants with 15 each, while there are also 12 from Japan, nine from South Korea, seven from Russia, five from the United States, and three each from Canada, Italy and the United Kingdom. The top 10 pianists will qualify for the Grand Finale, to be held on 18-20 October.

DG has collaborated with the Chopin Institute on important events in the past, notably ‘Chopin Year’ in 2010 and the acclaimed ‘Chopin and his Europe’ festivals, artistically directed by Stanisław Leszczyński. The renewed partnership will also yield a commemorative, 11-CD box set, Great Chopin Pianists, slated for release in late 2015. Drawing on the riches of the DG catalogue and the Chopin Institute’s extensive archive, the box set will contain performances of Chopin works from the top-prize-winning pianists of every Chopin Competition between 1927 and 2010.

« The opera house that opens just 80 nights a year

Everything that’s wrong with classical downloads, starting with Kim Kardashian »