A Norwegian film festival has refused entry to a film about disabled children because it is Israeli, not Palestinian.

A Spanish music festival has cancelled the American rapper Matisyahu because he refused to sign a Palestine solidarity statement.

Orwell was right. The world can only conceive of politics in binary simplicities. Palestine good, Israel bad. 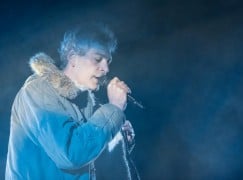