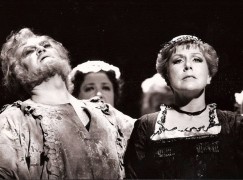 ‘The day Jon Vickers rattled his chains at me’

The splendid English mezzo Sarah Walker has been talking to us about her experiences with Jon Vickers in the Elijah Moshinsky ROH production of Handel’s Samson in 1986. 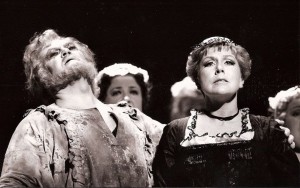 It was my third enagement at Covent Garden and there was all sorts of things we had to be terribly careful about. Everything was built around Jon. Julius Rudel, the conductor, would start Total Eclipse at a nice baroque pace and Jon would come in and it would just get slower and slower. Wonderful.

I arrived one afternoon to do Micah’s aria Return O Lord of Hosts and the people on the rehearsal desk all said to me, be very careful, don’t put any decorations in.

So I go on stage, facing the auditorium, and Jon is behind me on the trolley.

I start the aria and it’s going well and then, somehow, I slip in a little decoration.

Behind me, I hear this little rustle of chains. Believe me, I didn’t do it again.

Afterwards I asked around what it was about. Apparently that morning, Delilah – Carol Vaness – had been doing all sorts of decorations and there was a huge explosion from Jon. He stormed up to (the manager) John Tooley’s office and said it was against his religion to decorate the oratorio.

This, said Jon, was God speaking through Handel. You don’t mess around with that.

Anyway, it was around my birthday. We lived in SE London and you don’t normally get people coming all the way out to Catford for a party. Jon, his wife and Julius all came. Jon brought me a volume of Constable paintings.

He was really nice to me. Maybe because I was a mezzo. He might not have been so nice to a soprano.

Demand for an ENO Commons inquiry »