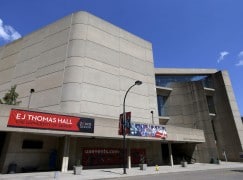 US university shuts concert hall to save cash

The E. J. Thomas Hall at the University of Akron, Ohio, hosts many classical performers, particularly soloists who draw audiences from the Cleveland-Columbus corridor.

Yesterday, its director and staff were made redundant and the hall was mothballed.

The University of Akron is no longer a place of culture.