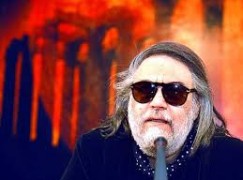 The toughest interview of my life

A couple of years ago, as a favour to a friend, I attempted to conduct a rare interview with the Greek composer Vangelis, famed for the Chariots of Fire score.

I should have known better.

Everyone in the music biz has a Vangelis story and none of them is filled with sweetness and light.

Early success can be a curse, breeding a sense of entitlement. Vangelis does what he does on his own terms. When I turned up at his Dorchester suite at the appointed hour of the afternoon, he was in his dressing gown and apparently disinclined to discuss any of the topics he had previously agreed to consider.

The next hour was, for me, excruciating. I came away thinking we had maybe got something new out of the encounter, but feeling in dire need of a large compensatory bar of chocolate.

Now, after intensive effort by a brilliant editor, the interview has finally been published.

« Do you listen with eyes shut?

Exclusive: Cleveland looks to Seattle for next clarinet »