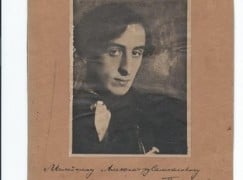 Marina Mdivani, a Georgian pianist and sometime student of Emil Gilels, has uncovered a rare and extraordinary review of Vladimir Horowitz in the early Soviet years. It is of three recitals that Horowitz gave on concecutive nights in 1924 in Tbilisi, Georgia. Marina sent the review to our friend Elijah Ho, who has translated it here.

Written by the musician and chess master Alexander Samoylovich Petrokovsky (1888-1948), the review begins:

The first Horowitz recital with his unforgettable “Don Juan” was enough to realize that this was a superstar: phenomenal technique, a gem of performance, scales, octaves, virtuoso passages – everything was amazing.

The Medtner of the second recital demonstrated that young Horowitz can play as an experienced artist, and that age is not a problem for a great talent.

The third recital – Liszt – revealed, once and for all, the most important, the most precious fact: Horowitz is not only an exceptional virtuoso, but also a profound poet who always has something to say. It was, in a way, a ‘Liszt renaissance’! The great musician came back to life and brought the soul’s poem to us with Horowitz magic.

Elijah also reproduces a photo that Horowitz signed at the time for the enthusiastic reviewer. 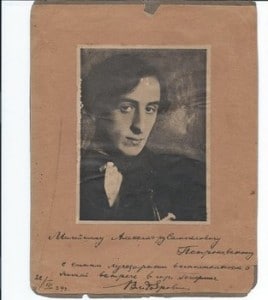 « Jonas Kaufmann fight goes on trial at the Old Bailey