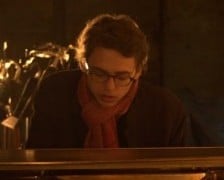 The Russian pianist Boris Berezovsky has given his views on the judging process:

‘I’m not satisfied with the results of the competition in the sense that our beloved Frenchman Lucas Debargue who deserved as a minimum a bronze, in my opinion even silver, was shifted to the fourth. Surprisingly, it was the decision of non-Russian jury members. The fact that we should respect audience as well who appreciated him and greeted him rapturously didn’t convince them. They said he’s not professional.

‘For me, the best pianists were these who placed first and last.’

Not professional? Maybe that’s why he’s so appealing.

UPDATE: Better to be unprofessional, here.

« South African tenor wins Belvedere (but not its audience)

Canada names woman music director, (not) only its second »