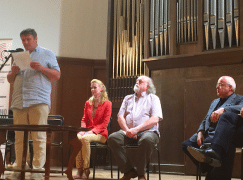 Peter Donohoe (2nd right), a member of the piano jury, has written the following analysis for Slipped Disc:

With the greatest respect to and for Boris Berezovsky, both as a musician and as a generous and friendly personality, if any of the non-Russian jury members described Lucas Debargue as unprofessional, it most certainly was not me.

How many times do the following have to be stated?

Firstly in general terms, that the results of any round in any competition – including the final – comprise an imperfect, and sometimes incomprehensible and unpredictable default that, more often than not, no one on the jury is entirely happy with. That is what happens when you apply democracy to something so subjective, abstract and variable as a music competition. The upside of the competition world we do not need to go into here, but, if run well and fairly, there is no question that the upsides far outweigh the down.

Secondly, also in general terms, when a participant is either eliminated in earlier rounds, or does not come first in the finals, it absolutely does not mean that they are ‘losers’, that the jury did not like their playing, or that they have failed in some way. It means that democratically the overall verdict was that the jury agreed more on those who received the higher awards. Generally speaking that means that those who receive lower prizes tend to be the ones who divide opinion more. [I would like to point out that Vladimir Ovchinnikov and I shared the Silver Medal in 1982 at the Tchaikovsky Competition – in Volodya’s case I do not know why, but in my case it seems that it was because one jury member could not accept my view of the Liszt Sonata, because it differed so widely from his. Sh1t happens, but winning the Silver Medal at the greatest, the biggest and the best piano competition in the world does not comprise sh1t. In fact, being in the finals at all is a major achievement, and those who describe the winners of anything other than First Prize as ‘losers’ would do well to remember that.]

Thirdly, and more specifically, Lucas Debargue did not come ‘last’; he officially and essentially came fourth out of fifty seven. Just think about that again: out of the hundreds who applied, 57 were chosen from internet links to be in the preliminary round, 36 were chosen to go through to the first round, 12 to go to the second, and six to the final – and Lucas received the fourth prize. It is slightly complicated by the fact that there were joint second and third prizes, but it is still an extremely major achievement. Being in the finals at all was an even greater achievement on the part of all the six participants this time round; the technical level of all entrants – including all 57 in the Preliminary Round – was astounding – noticeably even more so than in 2011 – even if the artistic level was somewhat less consistent. I can honestly and openly state that not a single one of the 57 to whom I listened was less than superb technically.

Fourthly, I do not know, or much care, what other jury members voted at the finals. The reason I do not know is that, as far as I was aware, none of us were supposed to be given access to the information; it seems that there were exceptions – either that or we have here the result of supposition, or gossip, or private grumbling behind the scenes. I felt that there was a good argument for every one of the six finalists to win Silver, and thus for the other prizes to be distributed accordingly. i.e. that none were completely suitable for the Gold Medal, as no one in my view was fully and consistently yet ready for the sort of international success and exposure that the Gold Medal would give the winner at such a gigantically important competition. In other words, all six were close, but there were issues with them all that would not be issues at all at a smaller-scale competition. (That is not to say that they would not be ready at some future date; just not yet.)

[Those who have never been through the experience can perhaps not imagine how much of a curse winning a competition at the wrong time can be. I feel strongly that we on the jury also have a duty to protect young musicians from the mercilessness of the media spotlight that almost no one I can think of has avoided suffering from as a result of high-level competition win. Every weakness is exposed, and homed in on. This is something that does not happen to those who do not win, so less prattle about the jury having inadvertently created a ‘martyr’ by deliberately conspiring against Mr. Debargue would be appreciated.]

However, the democratic decision differed from that, which it is my duty to entirely support, because, although I have very strong opinions – for which I was invited onto the jury in the first place, and feel very honoured as a consequence – I do not possess sufficient confidence in those opinions to openly state that the other jury members were wrong – i.e. that I know better and that my opinions comprise facts – I will leave that sort of arrogance to some of the contributors to this site.

In my view, the moment to either run to the press or its equivalent, or to walk out on a jury, is when one detects cynical manipulation or corruption; disagreeing with the majority decision does not comprise a reason – if you don’t like it, don’t sit on any future jury with those whose views you do not respect, and in the meantime, accept and support the majority view – in particular out of consideration and sensitivity towards the participants.

Fifthly, I would like to stick my neck out and say that – in my opinion only – there were performances earlier in the competition – one in particular – that stood out as absolutely exceptional. These were individual performances of single pieces, that indicate nothing particularly significant in relation to those artists being ready for a longterm future, lifestyle and the artistic responsibility that goes with success. That said, that feeling led to me voting for those pianists to go further in the competition, but sadly it appears that the majority disagreed, and perhaps that majority was correct; how can we possibly know? Within reasonable parameters, anyone who thinks he or she does know is arrogant beyond description.

It is also worth noting the degree to which all this nonsense about Debargue undermines the success of Masleev, and even more that of Li, Geniusas, Kharitonov and Redkin. Hardly a syllable to be seen about any of them. How thoughtless can some of you be?

Finally, does anyone really think that someone representing the political view held by the Russian government got together with the jury and procured an agreement to fix the result in favour of a Russian – either on the basis of the 175th anniversary of Tchaikovsky’s birth, or – even more fantastically – on the basis of keeping up the Russian end in the face of opposition to Russian actions in Ukraine? For God’s sake get real. What would we – the jury members – get out of it?

Some berk in these pages even implied that Valery Gergiev offered us engagements as soloist with one of his orchestras if we acceded to his pressure – presumably directly via him from the Russian President – to fix it for a Russian winner. Give me a break. I know for a certain fact that Gergiev openly stated that he didn’t care at all what nationality the winners were – only that they were deemed the best by the juries. The whole piano jury, as far as I could ascertain, felt exactly the same, and neither Maestro Gergiev, nor the competition management – nor indeed, Vladimir Putin – applied even the remotest suggestion of any pressure.

One more point: what is this nonsense about being ‘amateur’ as opposed to being ‘professional’? Do you really think that unprofessional behaviour is an indicator of genius? If so, it follows that to behave professionally is an indicator of mediocrity. Of course, I do realise that many people do think along these lines, mainly because it makes for more talking points, and creates good copy. However, the reality is that genuine musical genius tends to persuade people to make allowances for any lack of professionalism; surely it is hardly rocket science to realise that the reverse does not follow – a lack of professionalism does not constitute genius. It is parallel to the obvious fact that a few wrong notes do not detract from someone’s musicianship and artistry – something we would surely all accept – but that this does not mean that technical inadequacy translates into musical genius. It is the people who propagate such patent nonsense who are the amateurs. The definition of a true professional is not, as seems to be suggested, someone who simply churns out efficiency without love and reveals nothing; just the opposite in fact. And they are able to see through such mediocre platitudes and recognise true artistry for what it is – a genuinely high level of understanding of the art of music, supported by experience, technical proficiency and in this particular context a persona that is ready for the ups and downs, the highs and lows and the boosts and blows that winning such a high profile competition as the Tchaikovsky Competition entails. None of the finalists demonstrated a lack of professionalism to me; it never crossed my mind as an issue at all.

And the idea that anyone on the jury took exception to Lucas’ outfit, or that he didn’t say ‘spasibo’ for his flowers is risible. These notions are nothing more than chippy rumours, and those who start them need to grow up. I think we need to reevaluate what a competition really stands for. It is nothing more than a crystal ball regarding any of its participants, into which a jury member of integrity looks long and hard. The decisions that we are required to make do not comprise facts about who is better than whom. No one would be happier than I to accept a long term future for these competitors that belies their 2015 placings. This is only the beginning for all of them.

Please, everyone, try to understand the difference between a democratic result and a jury ‘decision’; the first exists and the second does not. The mechanics involved are very complex, which is why my first point – see paragraph three near the top of this post – needs to be fully accepted; it took several first-hand experiences on my part for me to realise this . Once I had done so, some of the anomalies from the competition world – including my own fate in all four that I entered – began to make sense.

I point everyone to this article from The Spectator, written by Ismene Brown; I could not have put it better myself – in fact, I haven’t.