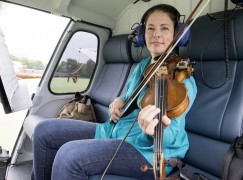 It’s not easy or cheap to perform, but with Audi on board as sponsors the heat-seeking Minguet Quartet put on a rare and widely-anticipated performance of the airborne work in Ingolstadt.

Then bits started falling off.

She was replaced by Munich orchestra player Felix Gargerle, who was meant to be introducing the performance. He, in turn, was replaced on stage by an Audi flak who called for more Vorsprung, the festival’s brand name.

The Minguet’s second violin Annette Reisinger was looking green. She asked for a sick bag. Apparently she used it.

The show was a shambles.

Do not try this at home.