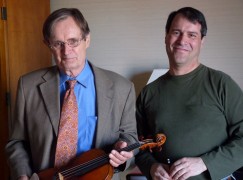 My violin and The Man from U.N.C.L.E 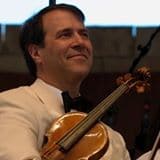 It was nice to have my violin acknowledged from the stage during the concert today! We’re playing with Classical Mystery Tour, a Beatles tribute band. Backstage I told them the story of my violin (a J.B. Vuillaume, del Gesu model from 1850, numbered 1801) and how, after buying it, amongst its papers was a letter from Hill and Sons in London stating that it had been the favorite violin of the late David McCallum. The only David McCallum I knew of was the actor who played Illya Kuryakin on the Man From U.N.C.L.E. I used to jokingly refer to the violin as the ex-Kuryakin.

A few months after buying it, Sir Neville Mariner was conducting us and I was Concertmaster. He glanced at my violin and exclaimed “I know that violin!” I told him about the papers and he said “no, no, no…you’re thinking of David McCallum junior, the actor. His father, David McCallum senior was Tommy Beecham’s concertmaster!”

Well, A Day in the Life, Yesterday and Eleanor Rigby all had fairly prominent violin solo parts during these past 2 days of performances of all Beatles music and it just felt right to be playing it on the violin that helped to bring many of those immortal pieces of music into existence.

After learning all this I started the process of trying to get in touch with David McCallum junior and after many months of clearly getting filtered/vetted by folks that were concerned with keeping the creepy people away from him, I got a lovely email from him saying “I would love to talk about daddy’s violin with you”. It took a while before our schedules lined up, but he very graciously drove to our hotel while we were on tour in LA and he was available to take a break from the set of N.C.I.S. 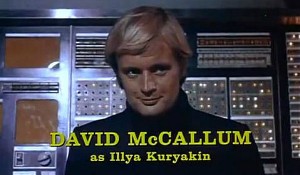 I showed him the instrument and played it for him (very badly unfortunately) and he was clearly pleased to see it and hear it again. We had lunch together and he told me stories of his growing up with his parents playing violin and cello and going to Hill’s shop and his dad playing the game of “spot the Strad” when he would play a handful of instruments and it was Jr’s job to identify which one was the Stradivarius.

It was really great to meet such a gracious man and to connect the history of my violin to its past. It occurs to me now that in the tradition of naming violins after well deserving former players, this violin should now be christened the ex-McCallum Vuillaume.

« Maestro stays: Andrew renews Down Under