Robert D. Jorgensen suffered a heart attack in the middle of a July 4th concert in Akron, Ohio. He asked cornet soloist Carolyn Curtis to take over. Later that evening, after surgery, Jorgensen died.

‘The Freedom Brass Band of Northeast Ohio is very deeply saddened …,’ a statement said. ‘Mr. Jorgensen served the band since the fall of 2006… He was also Director of Bands Emeritus at the University of Akron, where he served for 26 years.’ 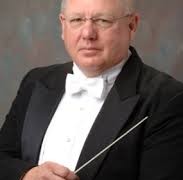