The Glyndebourne Fetival has announced its next-season plans somewhat earlier than usual. Press release below. 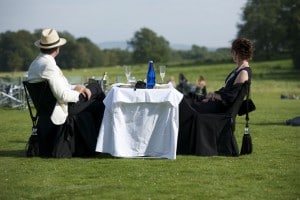 In the 400th anniversary year of the death of William Shakespeare, the 2016 Glyndebourne Festival will present two operas based on his work.

Berlioz’s Béatrice et Bénédict, adapted from Much Ado About Nothing, will have its fully-staged Glyndebourne debut in a new production directed by Laurent Pelly.

Glyndebourne has previously performed the work in concert at the Royal Festival Hall in 1993 when the Festival relocated there while a new opera house was built.

Berlioz had a great passion for Shakespeare, whose plays inspired some of his greatest works including a King Lear overture, his great dramatic symphony Roméo et Juliette and some smaller vocal works based on excerpts from Hamlet.

Glyndebourne Music Director Robin Ticciati, an ardent champion of Berlioz, will conduct the opera and said: “In Béatrice et Bénédict we see Berlioz responding to his great love of Shakespeare. It’s a magical piece which fizzes with texture and lightness and it will be a great pleasure to conduct the opera’s first full staging at Glyndebourne.”

French mezzo soprano Stéphanie d’Oustrac will make her role debut as Béatrice opposite the US tenor Paul Appleby, a leading artist at The Metropolitan Opera, who makes his UK debut this month in the 2015 Glyndebourne Festival production of Handel’s Saul.

An impressive ensemble cast has been assembled including bass Matthew Rose as Bottom, countertenor Tim Mead as Oberon and coloratura soprano Kathleen Kim as Tytania. Kazushi Ono, last seen at Glyndebourne in the 2012 Ravel double bill, will conduct the London Philharmonic Orchestra.

David Pickard, General Director of Glyndebourne, said: “Shakespeare’s work has inspired artists of all genres and generations; opera is no exception. Given Robin Ticciati’s passion for Berlioz there seemed no better time to present a full staging of Béatrice et Bénédict. I’m also delighted that we’re offering another chance to experience a true Glyndebourne classic, Peter Hall’s timeless A Midsummer Night’s Dream.”

Glyndebourne’s Shakespeare commemorations continue into the 2017 Glyndebourne Festival with the world premiere of a new opera based on Hamlet. Composed by Brett Dean, one of the most celebrated international composers of his generation, it features a libretto by Canadian writer and theatre director Matthew Jocelyn.

Dean’s first, and only other opera Bliss premiered to great acclaim in Sydney in 2010 and was performed at the Edinburgh International Festival the same year.

Composer Brett Dean said: ‘‘Shakespeare’s Hamlet is obviously one of the greatest, richest, most influential texts of all time. It is a story that exists, like a delicate membrane, at the very cusp of different states, as epitomised by its most famous lines: to be or not to be. Questions of life and death, life and afterlife, action and inaction, loyalty and deceit, madness and sanity, tragedy and comedy all live side by side in precarious proximity. My hunch is that this mysterious border-town between existence and oblivion is a place where music can be found.”

Hamlet will be conducted by Vladimir Jurowski making his first return to Glyndebourne since completing his tenure as Music Director in 2013. Neil Armfield will direct the production with Allan Clayton in the title role leading a cast which also includes Barbara Hannigan, Sarah Connolly and John Tomlinson.

The 2016 Glyndebourne Festival opens on 21 May with the return of David McVicar’s acclaimed 2011 production of Die Meistersinger von Nürnberg, a landmark in the company’s performance history that fulfilled founder John Christie’s dream to stage the opera at Glyndebourne.

Robin Ticciati will conduct the London Philharmonic Orchestra for his first ever Wagner opera. The distinguished Canadian baritone Gerald Finley, who began his career in the Glyndebourne Chorus, returns to the role of Hans Sachs, with American soprano Amanda Majeski as Eva. Canadian-German tenor Michael Schade makes his Glyndebourne debut as Walther von Stoltzing.

Then follows the season’s second new production, Rossini’s Il barbiere di Siviglia, based on the first of Beaumarchais’ ‘Figaro Trilogy’ of plays.

Not seen at Glyndebourne since 1994, Il barbiere di Siviglia will be directed by Annabel Arden and conducted by Enrique Mazzola, reuniting the creative team behind Glyndebourne’s popular production of L’elisir d’amore, which premiered in the 2007 Glyndebourne Tour. The production stars two Glyndebourne favourites; the internationally acclaimed lyric soprano Danielle de Niese as Rosina and Italian buffo baritone Alessandro Corbelli as Dr Bartolo. The award-winning young German baritone Björn Bürger will make his Glyndebourne debut in the title role.

The Festival 2016 line-up is completed by a revival of Melly Still’s 2012 production of Janáček’s The Cunning Little Vixen. The lead female roles will be taken by Slavic singers; Russian soprano Elena Tsallagova, who sang the role of Nanetta in Falstaff for Glyndebourne in 2009 and 2013, plays Vixen Sharp Ears, and Czech soprano Alžbĕta Poláčková makes her Glyndebourne debut as the Fox. English baritone Christopher Purves will play the Forester and the Czech conductor Jakub Hrůša conducts the London Philharmonic Orchestra.