In September 1984 Placido Domingo, still a tenor, sang his first German role – Lohengrin – at the Met. The New York Times chief critic, Donal Henehan, thought ‘he faced up to the challenge extremely well’.

Far better than the lower voices, at any rate: ‘Franz-Ferdinand Nentwig’s quavering and bleating baritone, annoying in the opening act, did not actually smooth out later on,’ wrote Henehan.

A stalwart of the Hannover Opera, Nentwig was one of Germany’s most trusted Wagner singers. He took major roles in Vienna every year from 1976 to 1987 and was booked in Paris, Monte Carlo and Aix. But something about his voice irritated US critics. Six months ahead of his Telramund, Martin Bernheimer wrote in the Los Angeles Times:

‘The current revival of “Die Meistersinger” at the Metropolitan Opera doesn’t have a Hans Sachs.

‘It only has Franz Ferdinand Nentwig, who strikes amiable poses, approximates the vocal line with thick, dark, coarse, often off-pitch mutterings, and runs out of voice long before the 5 1/2-hour marathon reaches its bombastic, Deutschland-ueber-Alles climax on the festival meadow.’

What satisfied the Germans was not necessarily for export.

Franz Ferdinand Nentwig died on July 14 at his home in Portugal, aged 85. 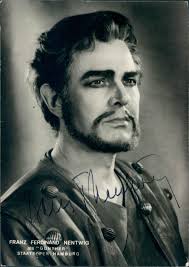