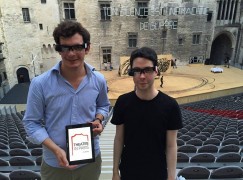 There was a different kind of premiere at the Festival d’Avignon last weekend. 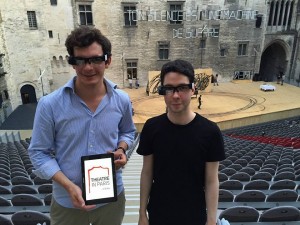 The audience at Olivier Py’s French-language staging of King Lear were able to watch the show through a pair of augmented reality glasses, which displayed a translated text in real time.

There’s a choice of French, English or Mandarin; the projected text is visible only to the wearer.

The Festival d’Avignon, a pioneer of innovative theatre, is the first to trial the high-tech specs, co-developed by Paris-based companies Atos and TheatreinParis.com. Carl de Poncins, Theatre president, said: ‘I’ve had the great privilege to welcome, together with Mme Fleur Pellerin, French minister of Culture and Communication, two spectators from Taiwan at the premiere of King Lear in the Cour d’Honneur of the Popes’ palace in Avignon. They were able to follow this French production of Shakespeare’s classic with Mandarin surtitles.’

According to de Poncins, the final product could be in use in opera houses and theatres in the UK within a year. Dramatic reductions in neck pain from craning to view surtitles is one expected outcome. Viewers who already wear prescription glasses, however, may grumble about having to double up.