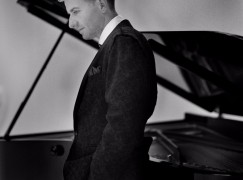 The masonry keeps falling off the fraudster’s failing agency.

Agent after agent, artist after artist, the big fish are finding their way to the IMG fire escape.

Effective October 1, 2015, HarrisonParrott will take on the worldwide representation of internationally acclaimed pianist Jean-Yves Thibaudet. Thibaudet’s artistic depth and natural charisma have made him one of the most sought-after pianists today. He has performed around the world for more than 30 years and recorded more than 50 albums, including three popular film scores. The New York Times recently wrote of his playing, “Every note he fashions is a pearl…the joy, brilliance and musicality of his performance could not be missed.” In 2010 the Hollywood Bowl honored Thibaudet for his musical achievements by inducting him into its Hall of Fame. Previously a Chevalier of the Ordre des Arts et des Lettres, Thibaudet was awarded the title Officier by the French Ministry of Culture in 2012. This season, he tackles three artist-in-residencies: at the Royal Concertgebouw Orchestra, the Seattle Symphony, and the Colburn School of Music.

Thibaudet comes to HarrisonParrott – to be represented by Joint Managing Director Lydia Connolly – after a tremendous 30 years of professional growth and collaboration with Mastroianni Associates and IMG Artists. He writes, “I leave my colleagues with nothing but fond feelings. I am blessed to have had a multi-decade career, and I look forward to the decades to come! I am thrilled about this new and fruitful partnership with Lydia Connolly and HarrisonParrott as I look to the future.”

Until October 1, all inquiries should continue to be directed to Kristin Schuster at IMG Artists.