An African musician in the Austrian Army in 1661

The musicologist Michael Lorenz has uncovered a fascinating snippet of Austrian military history – the story of Ferdinand Christian Ali, from Borna in Ethiopia, who was (literally) drummed into the Emperor’s service.

He was known as ‘His Roman Imperial Majesty’s hartschier and field army tympanist’ and he married ‘the honorable and virtuous maiden Elisabeth Kleybinger, legitimate daughter of the late Andreas Keyblinger, former citizen and baker in Steyr, and Christina his married wife.’ 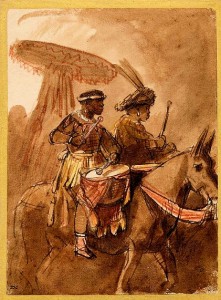