A vital London cellist has died

He was principal cello with Pierre Boulez at the BBC Symphony Orchestra and with Neville Marriner at the Academy of St Martin in the Fields, flitting from one style to the other without turning a hair. He also played on the Beatles’ Sergeant Pepper album.

Denis Vigay, one of London’s most enterprising and influential cellists, has died at the age of 89.

Our condolences to the family. A short life history below. 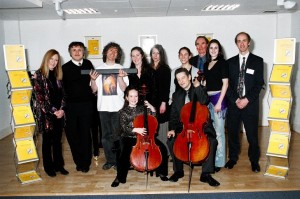 Denis is standing back row, 3rd from right

Born in Brixton in 1926, he came from a musical and theatrical family. While a pupil at Battersea Grammar School, he and his close friend Dennis Lewell set up a schoolboy orchestra, the Tooting Bec Orchestra, to raise funds for charity.

At the age of fifteen, he was awarded a scholarship to the Royal Academy of Music where he studied with Cedric Sharpe and played in the First Orchestra under Henry Wood. His studies were interrupted by military service. He was part of ENSA and in the band of the Royal Engineers. At the end of the war, he was posted to Naples where he would sell his cigarette coupons to buy tickets to the opera.

Having completed his studies at the RAM, he became principal cello of the Sadlers Wells Opera Orchestra. In the days still of heavy smogs, a performance of La Traviata had to be abandoned when the conductor could no longer see the stage on account of the fog that had seeped into the theatre.

He went on to become principal ‘cello of the Academy of St Martin in the Fields and a member of the Academy Octet, making many recordings and touring all over the world. Denis had an extensive freelance career, working with most major orchestras including the Boyd Neel Orchestra, English Chamber Orchestra, London Symphony Orchestra and Royal Philharmonic Orchestra, on soundtracks to major British and American movies and on albums with the Beatles such as Sgt Pepper.

He taught at the Royal Academy of Music and was tutor for many years of the cellists of the National Youth Strings Academy. He married Greta in 1952. She died in 2014. They are survived by their three children, Martin, Karen and Teresa. Martin has for many years been a member of the Royal Opera House Orchestra.

A piano solo by a Tunisia beach survivor »