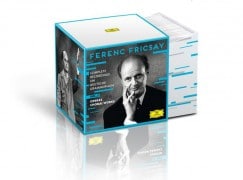 A better conductor than Karajan?

In the ruins of Berlin, the man who restored music making at high performance from 1948 on was the brave and extraordinarily musical conductor Ferenc Fricsay.

His first position was as music director of the Deutsche Oper in West Berlin, but it was as head of the US-funded RIAS radio orchestra that he achieved performance standards of a consistency as transcendent, if not higher, than the Berlin Philharmonic.

But those who know his work will be in no doubt which gave more valuable service to the city, and which was in most respects the more musical conductor.

Master of the pedal steel guitar »