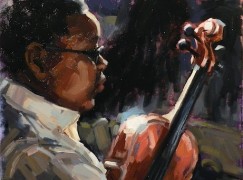 A Brooklyn teenager who is presently in a juvenile detention facility has been announced as one of four winners of the StringQuest Student Promise Award.

He wins a professional violin and the chance to put his life back on track.

The young man, whose name in withheld, earned his place among the winners with an essay describing how he held a violin for the first time, when he was seven years old. It felt, he wrote, ‘like I had a different world in my hand … I would be lost in the sound of the violin.’

He was entered for the award by music educators at Carnegie Hall whom he had contacted through school. ‘He demonstrated such a commitment to studying the violin and exploring music that we wanted to be sure he could continue his interests,’ said Elizabeth Ferguson of Carnegie Hall’s Weill Music Institute.

Read the full human story in the New York Daily News (not the Times, needless to say).