On Sunday morning, November 14, 1943, Bruno Walter called in sick with flu and the New York Philharmonic had to find an instant replacement, without rehearsal, for its nationally broadcast afternoon concert.

Assistant conductor Leonard Bernstein had been out partying all night. He took the call, dropped by Walter’s sickbed to check his score markings and ripped into the concert as if life itself depended on it.

Next morning, Leonard Bernstein made the front page of the New York Times.

A star was born.

Yesterday, a major conductor came down with an ear infection, hours before a concert that was to be broadcast nationally on BBC Radio 3. A young assistant stepped in ‘at very short notice’.

The concert went out last night. Nobody noticed.

We hear from musicians that Alpesh Chauhan, 25, did extremely well in Andris Nelson’s place, never having studied the Strauss horn concerto before and leading unflappably through Schubert’s Unfinished and Dvorak 7th symphony.

There are no reviews this morning, no media excitement.

What has changed? In 1943, radio was the only domestic entertainment and there were few available channels. The nation huddled around the receiver on a Sunday afternoon for whatever it might yield. A change of maestro was big news.

In 2015, there are so many other things we can do at home, and very little attention to live concerts on Radio 3, a background burble at best. A sign of our times, perhaps, but a sad one for new talent.

Bookmark the name: Alpesh Chauhan. He used to be principal cello in Birmingham’s youth orchestra and he’s yet to make his official debut with the City of Birmingham Symphony Orchestra. That will come on June 25. 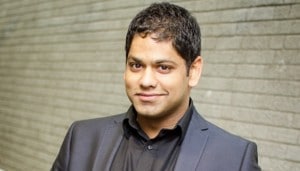 I wonder if Andris was able to hear the concert?

You can hear the broadcast here (for 30 days).

Calling out Daniel Barenboim on the Israel boycott »