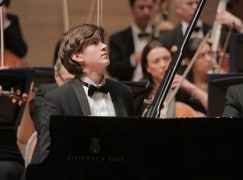 The author Marina Evreison Arshinova, who used to work at the competition, assesses the mood at the end of Week 1.

The first stage of the Piano #tch15 is over, the second has begun.

The Russian-Lithuanian pianist Lukas Geniusas, 24, second prize winner at the 2010 Chopin Competition, has been  winning the media vote. His playing in the first round was cheering and revitalizing indeed.

By contrast, the Queen Elisabeth winner Yury Favorin, 29, fell victim to the system of refereeing and did not pass to the second round which was very disappointing.

For certain circles of audience Andrey Korobeinikov, 29, was one of the most wanted participants; however, he was absolutely unwanted by the major part of the jury. He made it easier for both groups – his performance was weak and unfocused, and even those who admire him, agreed that he сouldn’t go any further in the Competition.

Among those who will be playing in the second round Muscovites very much liked the second Lukas – French pianist Lucas Debargue, 24, particularly his inspiring interpretation of Beethoven’s Sonata op.10/3 . Maria Mazo, 32, born and raised in Moscow now lives in Germany. Under the guidance of the prominent piano teacher and juror Aryeh Vardy she achieved international recognition. In the second stage of the Competition she will play Beethoven’s Hammerklavier. The American George Li, 19, has excellent fingers. His depth has yet to be proved.

Daniil Kharitonov, 16, a student of Central Music School, pupil of Denis Matsuev’s teacher Valery Pyassetsky, is in with a chance. Kharitonov is strong in Rachmaninov, and has framed his second repertoire around that composer.

So what will the jury do? We shall see, and judge them all.

Joyce DiDonato: ‘We are culpable in Charleston’ »