Here’s the list, hot off the stage. Most are Russians and Koreans. Kristine Balanas (pictured) is a UK-based Latvian. 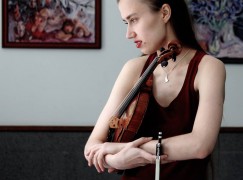