Two composers, a maestro and a music boss in Queen’s birthday honours

Sir Neville Marriner, 91, is appointed to one of the highest honours in the Queen’s gift, the Companion of Honour. 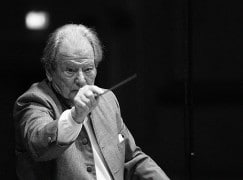 There are knighthoods for the Welsh composer Karl Jenkins and the pro-union Scot, James MacMillan.

as is the composer Mark Anthony Turnage and the chorus conductor Simon Halsey.

The gloriously unretiring Sally Groves, champion of living composers, is made MBE,

along with the clarinettist Michael Collins.

David Whelton, manager of the Philharmonia Orchestra for the past 30 years, becomes OBE.

Our congratulations to them all.

« The composer who’s still under a German state ban

The pianist who played til her fingers bled »