The first night audience at the Royal Opera House is not a baying mob. Disapproval is expressed by low applause and early departure. Last night, the audience broke its behaviour rules at a bad new production.

I have just been to see William Tell at the ROH. The first night of a new production and the first performance at CG for 22 years.

It started ok, but then soldiers appeared with machine guns!

In the 3rd act things went from bad to worse when the soldiers grabbed one of the peasants, stripped her and there was then a mock rape. The booing started and went on through most of the act and at the end.  Dozens of people then got up and walked out.

At the end of the performance there were cheers for the singers, quite rightly but there was a large amount of booing when the production team came on stage.

I have been to over 400 opera performances at the Garden, but I have never witnessed what I heard and saw tonight.

Most regular opera goers know that Kaspar Holten (Royal Opera artistic director) is not up to much, but I am astonished that Tony Pappano allowed this shameful production to go on in this form. Has he lost all artistic morals?

This is going out live at cinemas on Sunday afternoon. If the booing happens then the world is going to know about it!! 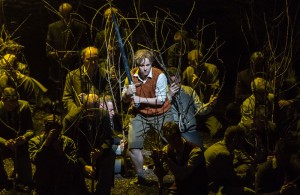 Holten issued a statement, saying he’s sorry. But not very:

‘The production includes a scene which puts the spotlight on the brutal reality of women being abused during war time, and sexual violence being a tragic fact of war. The production intends to make it an uncomfortable scene, just as there are several upsetting and violent scenes in Rossini’s score. We are sorry if some people have found this distressing.’

And here’s a further eyewitness account, sent to Slipped Disc by ‘Opera Spy’:

Prolonged booing and catcalls, normally reserved for an offending performer’s curtain call, erupted mid-performance at the Royal OperaHouse last evening, at one point seeming likely to stop the show or even start a fight. However, singers and orchestra ploughed through the interruption regardless, only for it to resume vociferously as the production team joined the cast lineup at the end. One habitué said it was the worst such demonstration of disapproval he had seen in 56 years of opera going. The occasion was a controversial updated (1950s) staging of Rossini’s Guillaume (William) Tell, one of the works the 19th-century Italian composer wrote to a French text for a Parisian commission. The ballet sequences which Paris opera audiences demanded in those days were replaced in this version by mimed scenes, one involving a fully nude rape victim, and it was this which provoked the sudden outburst last night. Subsequent trickles of shouted objection included “shame on you, Tony” for the conductor, a loud boredom snore, “big deal, they moved” for a static chorus and “sit down!” for a soloist obliged to try to sing
while lying on a table on his side. Rival factions yelled “bad behaviour” and “shut up or get out!” Covent Garden used to be such a genteel place.

« Iowa gets a woman concertmaster