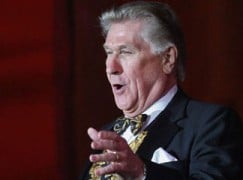 It’s a summer show, but still…

Alexandria, VA, USA:  Classical Movements is pleased to announce the “Prague Summer Nights Young Artists Music Festival” featuring 4 fully-staged productions of Mozart’s Don Giovanni under the stage direction of legendary American baritone, Sherrill Milnes. The Estates Theatre was featured in scenes from Amadeus and is the only remaining venue where Mozart conducted.

The 30 day Young Artist Festival with 100 students features multiple concerts, productions and travel, all arranged by Classical Movements, Inc. Nearly 500 singers and instrumentalists auditioned to be considered for the Prague Summer Nights Festival from all over the world and finally 45 singers and 55 musicians were selected along with leading faculty from all over the world including from the most important musical institutions in Berlin, London, New York, Boston, and Prague.

“I am so happy to return to the beautiful city of Prague where I was the first American to play Don Giovanni at the original Estates Theater where Mozart himself premiered it. It is exciting to be back after 20 years, this time in my Stage director debut for Don Giovanni as part of the Prague Summer Nights, Young Artists Program. I look forward to working with these brilliant young artists over the next 30 days and putting on these 4 productions of Don Giovanni with famous sets and costumes from the Estates Theater.” says Milnes.