Paradise Lost: When London’s South Bank was awash with concertgoers

The composer Christopher Gunning has written a moving reflection for Slipped Disc on the invasion of consumer entertainments into what was once a place for musical contemplation. 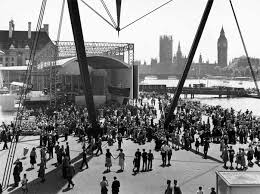 Philharmonia, Ashkenazy, Royal Festival Hall. Even though the Royal Festival Hall was only half full, it had been a magical evening with the Philharmonia and Ashkenazy giving of their absolute best in an all Sibelius programme. A special highlight was to hear that rarity, “Luonnotar,” with Helena Juntunen singing her heart out, and there were other delights too – the seldom performed Pelléas et Mélisande suite, and a selection of poignant songs previously unknown to me. In part two, the great composer’s Symphony no 2 was given a performance of enormous vitality and sensitivity which breathed Finland’s woods and lakes from start to finish.

It was one of those concerts after which you hardly dared speak, and indeed there was a time when you could wander along the river by night, thinking quietly about the music you’d just heard. You see, the South Bank is where I grew up musically; it was here I heard Pierre Monteux conducting Ravel’s Daphnis et Chloe and Stravinsky’s Symphony of Psalms. One night I heard Klemperer conducting the Brahms Requiem, and the memory still lingers. Years later, there were ground-breaking performances of his own music by Boulez, and another occasion which sticks in the mind was Kurt Sanderling conducting Mahler’s Ninth one Sunday afternoon. After that I roamed by the Thames unable to hold back tears as I watched the dark waters racing by. The list of formative events could go on and on, and even include a few occasions when I was fortunate enough to occupy the RFH conductor’s dressing room myself.

To build London’s major concert hall by the river was a stroke of genius, and we should be grateful to the Labour politician Herbert Morrison for driving the project through. When it opened in 1951, it was among the most progressive concert halls anywhere in the world, and despite various acoustic issues, it is still widely loved with its wide open spaces and sweeping staircases, the whole exuding an atmosphere of restrained dignity. But what of the area in which it now sits? Since the redevelopment in 2005-7, there has been a proliferation of bars and restaurants – I counted more than twenty. Then there’s a collection of market stalls between the hall and road, serving chocolates, ice creams and street food. Walk a little further and there are pubs and umpteen more restaurants. “Good!” you might think, it’s nice to have somewhere to go before and after a concert. But wait – few of the customers are going to a concert, a film at the NFT or a play at the National Theatre. No, they’re here to eat and drink – and to drink a lot. 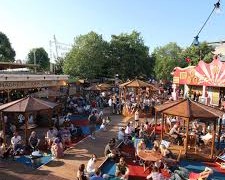 Back to my Sibelius concert, with that wonderful music playing to a half-filled hall. I came out, and wanted to saunter quietly along the Thames and Hungerford Bridge. From each eatery/drinkery loud music pumped out. Ten thousand people shouted to make themselves heard above the din. Empty beer bottles and dog-ends lined the rails overlooking the river. It was no better walking along towards Shakespeare’s Globe, where another few thousand congregated to shout at one another. What I’m saying is that a boozing culture has invaded London’s prime cultural hub and frankly it’s pretty much wrecked.

I once asked a waiter in one of the eateries how often he attended a concert. “They have concerts in there?” was the reply, such is the disconnect between the venue and its environs. I thought it was okay when you could get decent food in the hall itself, and the Skylon restaurant is still good, with its fabulous river views. I like Foyles too, although I wish there were more music books. The other places? They belong in the high streets, railway stations, and airports, but not here; this shouldn’t be yet another destination for hooray henries and yobs intent on nothing more than a piss-up.