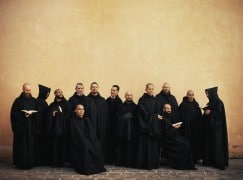 Monks sell more albums than the next 20 classical releases

This week’s Nielsen Soundscan charts will be greeted with cheers at Decca, whose latest monastery recording cleared more than 3,000 albums in the US. That’s the good news.

The bad is that the next two best-sellers sold around 300 each and anything below number 7 sold fewer than 100. The US market is kaputt.

Which monks? The beer brewers. Here’s their press puff:

The moving music of BENEDICTA was recorded by a group of 18 men; half American citizens and half representing a variety of cultural backgrounds who collectively are heralded as one of the most authentic active singing communities of Gregorian Chant today. They are led by Fr. Cassian Folsom, Prior – an American who studied voice at the venerable Indiana University before joining the monastery.  Fr. Cassian will make a rare visit to the United States on June 15 and 16, offering an unprecedented opportunity to learn about this community’s intriguing story first-hand.

The story of The Monks of Norcia’s youthful (average age 33) members remains the stuff of legend: in 1998 they journeyed to the quaint Italian village of Norcia, and resurrected the historical holy ground of the birthplace of Saint Benedict.  There, the monks became master brewers and standard bearers of Gregorian Chant, after Monastic devotional singing was not heard in the town for nearly 200 years. Says Fr. Cassian, “Music is important to us, especially for the sake of the prayer. Even someone who listens to this without any background will be drawn to it, I think, by its pure beauty and its mystical quality.”

In addition to the monks daily monastic life devoted to prayer and music, they also strive to communicate their vision of life by way of “earthly experiences.”  To that end, The Monks of Norcia operate a craft brewery at the monastery, Birra Nursia, where they produce brews that have gained devotees from distant countries, bringing new visitors to Norcia, adding to their compelling backstory in an unexpected way.