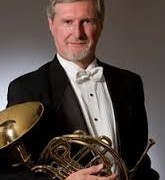 Longest serving US second lays down his horn

Our friend Peter Witte, Dean of the UKMC Conservatory in Kansas City, has written an affectionate tribute to his father, Tom, who is retiring this week after 42 years as as second horn of the Atlanta Symphony Orchestra. Peter believes his Dad is the longest serving current player in that position.

Astonishingly, one person has been playing in the horn section longer than Dad, Atlanta native and Georgia State University alumnus Brice Andrus. Brice began initially as assistant principal and then third horn with the ASO when Dad arrived. In 1975 Brice moved from my father’s right side, as third horn, to his left, becoming principal horn. That year, in tandem, Brice and Dad helped to build first a horn section, then a brass section, and ultimately an orchestra that became internationally acclaimed even as it remained locally committed….

What is clear is that the ASO’s 70 year ascent into the realm of America’s great orchestras was crafted through hundreds of musical partnership between stars like Brice Andrus and position players like Tom Witte, each specialist able to imagine and create something magical.