Bavarian State Opera has cancelled the July 4 live streaming of Claude Debussy’s Pelléas et Mélisande ‘for technical reasons’. Instead it will show Arabella with Anja Harteros in the title role on July 11.

Early Pelleas reviews have been mostly hostile. One critic reported that the audience considered Christiane Pohle’s production to be ‘the flop of the season’. Other critics found it static and depressing.

Wonder whether Covent Garden will pull the plug likewise on its much-booed William Tell. 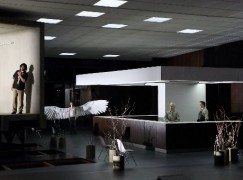