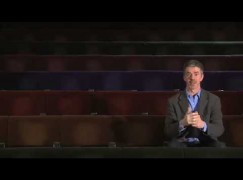 Robert was head of music at London’s Barbican Centre for 15 years, managing a £6 million budget.

A joint US-Dutch national, he went on to become managing director of the Nederlands Dans Theater in The Hague in August 2011, before turning into an arts consultant. Kennedy desperately needs new creative thinking. Let’s hope’s he brings it.

“As the nation’s performing arts center, I believe it is fundamentally important that the Kennedy Center exemplifies and champions a cohesive, powerful message on the role of the performing arts in our society,” commented Kennedy Center President Deborah F. Rutter. “Robert brings a wealth of multidisciplinary arts experience and creative leadership to the table, and I am excited to partner with him and our creative curatorial team of administrators and artistic leaders to shape an artistic vision for the Center in the years to come. His commitment and innovative approach to the artistic endeavor will build and expand on our mission to provide innovative programming that reflects the core of John F. Kennedy’s legacy.”

« Mental training for musicians is back on the curriculum