Just in: A towering music personality has died

We are saddened to learn of the death of Gunther Schuller, aged 89.  Christopher O’Reilly reports that he died at 7.55 on Sunday morning, Beethoven’s Ode to Joy playing by his bedside.

A composer who was equally at home in orchestral music and jazz, in 1957 he coined the term ‘Third Stream’ to point optimistically to a fusion future.

Gunther was a formidable advocate for fine music, a lucid writer and a generous teacher.

He leaves more than 160 scores. 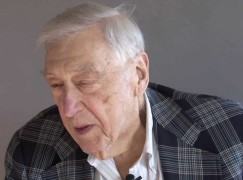 By way of brief biography, he played principal horn in the Met orchestra in the 1950s, founded the Modern Jazz Society with John Lewis and served as president of the New England Conservatory. A rich and varied life.