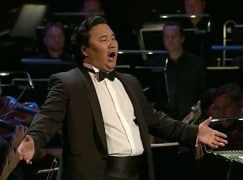 In Cardiff, Mr Mongolia is the one to beat

An opening set of two Italian arias and one Wagner has put Amartuvshin Enkhbat top of the leader board in the Cardiff Singer of the World final.

Showing neither nerves nor emotion, Amartuvshin played his set straight down the fairway and set a tough challenge for the remaining four contestants.

Amartuvshin Enkhbat was first prize winner in Placido Domingo’s 2012 Operalia competition. Apparently, that was not enough to get him out of Ulanbator and onto the world stage.

He conducts interviews through an interpreter. Language may have been his drawback until now.

Lauren Michelle from Los Angeles has a lovely instrument and a convivial stage presence, but she suffered pitch lapses early on and never saturated Korngold’s 3-hankie aria from Die Tote Stadt.

Oleksiy Palchykov, 29, tenor from Ukraine, has got what it takes. Voice in good shape and presentation vivid. He totally nailed Una furtiva lagrima. He’s a definite contender, probable winner of audience vote. Real showman in Lehar. Collects football scarves. Has he got enough up front?

Nadine Koutcher, 32, from Belarus,displays all the pluses and minuses of the old Soviet teaching system. Maximum technical command, minimum emotional intelligence. Fully developed instrument, not really a young singer. She’s exactly the type of singer opera managers pick for safety. If they go for a compromise winner, she’s in with a chance.

Her Bell Song rang out to perfection.

Breaking: Berlin Phil is rumoured to have chosen a music director »