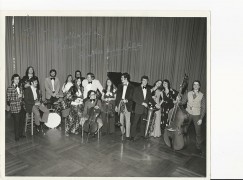 How Gunther Schuller got his students into a White House dinner

Mary O’Reilly, a violinist in the Rottderdam Philharmonic Orchestra, is one of hundreds of students who bonded with the great musician Gunther Schuller, and who never lost touch after they left college.

Mary has written this memoir of Gunther for Slipped Disc.

Although I regularly think of Gunther Schuller, today I am flooded with memories. When in the early 1970’s I as an 18 year old freshman first stood on the stage of New England Conservatory’s renowned Jordan Hall auditioning for orchestral placement I had of course no inkling of what the future would bring, just dreams, hopes and aspirations. And there I first encountered ‘President’ Schuller.

In the course of the years to follow, it transpired that he guided me continually and intensely. It would be an enormous understatement to simply say that he influenced me profoundly, no; he shaped me in a multitude of ways as a musician and person. Through him I gained deep insights into practically ever aspect of the career I would later carve for myself. The knowledge and training he offered me (as well as to scores of others), and the information he imparted, gave us the tools to pursue our dreams, each in our own fashion.

I could reminisce about personal experiences gained (as solo first violinist) during worldwide tours with the NEC Ragtime Ensemble, concerts in major American summer festival venues, recordings and television appearances, a state dinner in the White House – all envisioned, coordinated and directed by himself.

It was a state dinner for the Italian government, with President Ford. We were on tour in Europe with the NEC orch and chorus (another massive undertaking on his part), and I had planned to go visit my parents in Ireland. But that all changed when the invitation from the White House came in – off we went to DC!

Gunther Schuller with the NEC Ragtime ensemble, Mary is 3rd from right

Then there were the years I was granted to benefit from his intense tutelage whilst concertmaster of the NEC orchestra and first violinist of his Contemporary Ensemble with two marvellous summers studying at Tanglewood. The performance opportunities he provided were invaluable, though we as students took them all in stride. It can safely be said that he was more than demanding, highly critical, and never minced any words. Often I do think and reflect upon these highlights, but the thoughts that today preside in my mind regard his undying affection and consideration for his students.

He and I never lost touch, and would always meet whenever he was engaged in a production here in the Netherlands. The fact that an ocean separated us never kept us apart. We would often drive around Amsterdam looking at hotel rooms which might possibly suit his him on his next visit. Major criteria? The size of the desk – for composing, of course! Only recently he called just for a chat, and gave me the full rundown on his many endeavors of the moment. Without Gunther’s mentorship my musical life would have been far less fulfilling and/or successful. He offered us as students the opportunity to acquire the tools necessary to enter the world of the successful professional musician. And he loved us and stood by us throughout our careers. It was education par excellence. Thank you Gunther Schuller, what a gift to have known you for so long. Already I miss you exceedingly, but you will live with me forever.

« What musicians say about Kirill Petrenko